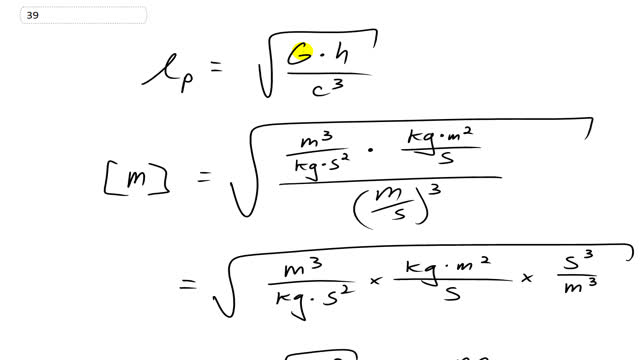 This is Giancoli Answers with Mr. Dychko. So Planck length is given as a square root of the gravitational constant times by the Planck's constant divided by the speed of light cubed. The dimensions for capital G are meters cubed over kilogram seconds squared; dimensions for Planck's constant is kilograms times meters squared over seconds and then divide that by the speed of light— meters per second cubed— and take the square root of that whole result. And we are gonna check to see well, I kind of made an assumption here that the Planck length is gonna have dimensions of meters because it's a length but anyway, I suppose we don't know that we are just gonna figure out what this all works out to. It's confusing to have fractions within fractions so let's sort that out by just copying this top part here I just copied this here and then dividing by this fraction is the same as multiplying by its reciprocal so we can have everything on one line. So instead of dividing by meters per second cubed, we are gonna multiply it by seconds cubed over meters cubed and that will make things a little easier to look at. And we have that the meters cubed here cancels with these meters cubed; this kilogram cancels with this kilogram; this seconds squared plus this second makes second cubed in the bottom canceling with this second cubed in the top leaving us with square root meter squared which is meters.