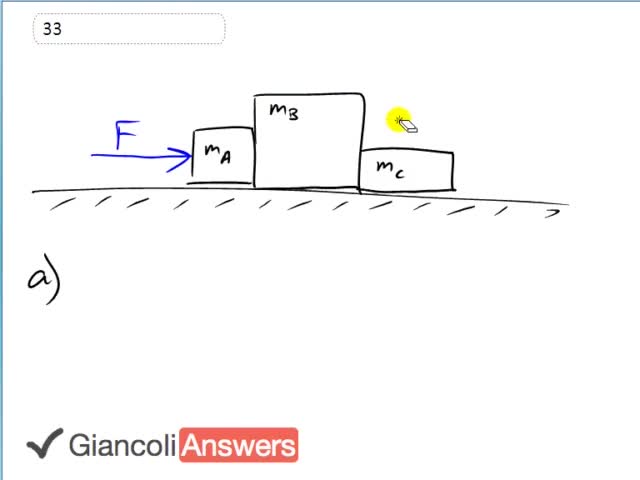 this video will not play, it just goes thru the first free body diagram of part a then restarts. Please fix this glich.

Thanks for the comment. I couldn't reproduce the error. I skipped through the different sections of the video by clicking on the "progress bar", and was able to play each section. You could try updating your Flash player: http://get.adobe.com/flashplayer/. If that doesn't work, please let me know and we could go through some debugging, by asking which browser and version you're using...

Let me know how it goes.

If you could please explain the purpose of finding the force of block A on block B, and Force of block B on C. Why is the ForceAB=64N and ForceBC=32N when The Net force of all the blocks is 32N. Why doesn't ForeceAB=32N? I understand that FAnet=FBnet=FCnet=32N, but where does the 64N fit in and why? I hope my question is clear and understandable.

Hi mharding09, thank you for your question. I'll try to answer this without mentioning algebra, since the video is full of that, and it sounds like you're looking for a different approach.

First off, let's clarify a couple of things. You mention that FAnet=FBnet=FCnet=32N, but let's be clear why: it's not because they're side by side and touching. It's because they have the same acceleration, and the same mass. If they had different masses, then the net forces on each would be different, since the one thing that definitely IS the same is their accelerations. The acceleration of each block has to be equal since they're side by side and touching, but in this question it's just coincidence that the net force on each is the same, and this coincidence occurs because each block has the same mass.

So where does 64N fit in? Well, kind of in the same way that the externally applied 96N force fits in... Let's personify each force acting to the right and imagine what it "sees". Each force knows it has to accelerate the mass in front of it at 2.67 m/s^2. The left-most, 96N force "sees" three blocks of mass 12kg each, but it might as well think of it as one block of mass 36kg, since there's nothing special about the crease between blocks. To accelerate 36kg at 2.67m/s^2 requires 96N. The second force to the right, F_BA (the force on block B, due to block A), "sees" 24kg in front of it, which means it has to bulk up to 64N. The last force to the right, on block C due to block B, "sees" only 12kg, and needs only a 'light-weight' 32N.

Hopefully this helps give a different way of looking at it, and let me know if anything needs clarifying.