For the vectors given in Fig. 3-35, determine

Figure 3-35 Vector magnitudes are given in arbitrary units. 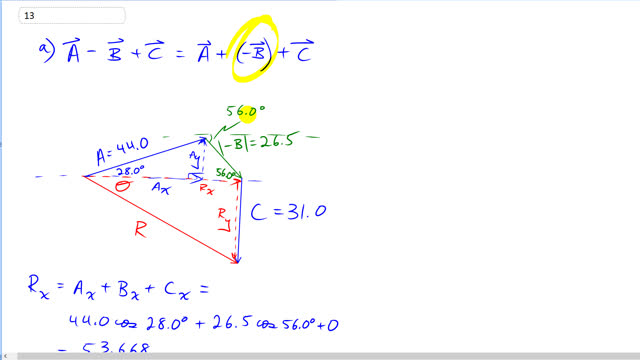 In part a) I'm confused as to why By is negative.
sin 56 = By/(-26.5) will result in a negative - I get that - but in question number 9, which uses the same vectors, the solution to By was positive, so why aren't they the same?

Is it because in the equation we're asked to solve for, we have to subtract vector B? Then why isn't Bx negative?

In question 13 the vector B is the negative of what it was in problem #9, which makes it point in the opposite direction. When I see a vector being subtracted, as vector B is in this case, I like to think of it as 'adding it's negative', which mean apply the usual rules for adding vectors, but flip around the one that's being subtracted. Instead of up and to the left in #9, it is now down and to the right here in #13. Since it's pointing downish, that makes the y-component, $B_y$, negative.

In both cases, the calculation for $B_y$ was $26.5 \sin(56^\circ)$ but here in #13 the result gets a negative in front if it despite the calculator saying 'positive'. This has to do with our understanding of the physical situation, in that the vector is pointing down, and so with that understanding we just put the negative there, regardless of what the calculator says. This might be going on a tangent, but just for arguments sake, if you wanted to always have the calculator say the correct sign, you would have to enter angles in standard position which is measured counter clockwise starting from the positive x-axis. In problem 13 the standard position angle of vector B is $360 - 56 = 304^\circ$, in which case $26.5 \times \sin(304^\circ) = -21.97...$ with the negative sign, rather than $26.5 \times \sin(124^\circ) = +21.97...$ (where $124^\circ$ is the standard position angle in #9). I don't recommend changing your angles to standard position, but I just mention it so that you're more comfortable placing negative signs where they belong 'by decrie', secure in knowing that there is a way to make the mathematics consistent with the physical reality if you felt like it. You're not doing anything wrong, in other words, by overriding the sign of what the calculator says and choosing the sign that fits the physical situation.

Maybe that was a bit long, but I hope it helps.