A diver leaves the end of a 4.0-m-high diving board and strikes the water 1.3 s later, 3.0 m beyond the end of the board. Considering the diver as a particle, determine: 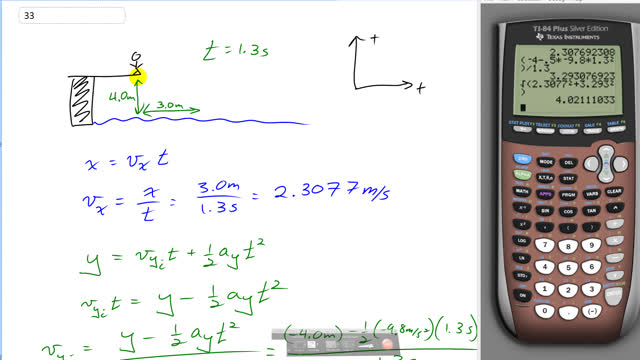 This is Giancoli Answers with Mr. Dychko. A diver launches herself off the diving board and lands 3 meters away from the edge of the diving board and from a height initially of 4 meters and it takes 1.3 seconds for her to get from the diving board to the water. So the initial velocity is what we have to find and so the x-component of the velocity we can find using this equation the horizontal displacement will be the horizontal velocity times time and we can solve for v x by dividing both sides by t horizontal velocity doesn't change at all during projectile's motion because acceleration is only affecting the vertical component of the velocity so that's why there's no initial in here and the equation's a simple one. So we have v x equals x over t so that's 3 meters divided by 1.3 seconds which is 2.3077 meters per second. And then we need to find the y-component of the velocity and combine the x and the y component using Pythagoras to find the speed and then use inverse tangent to get the angle and then we'll get the velocity after we have the direction and the speed. So now we'll find v y initial; we are taking up to be positive and to the right to be positive that's an important thing to keep in mind for this equation because our displacement's gonna be negative 4 meters for y we solve this for v y initial by taking this term to the other side by subtracting it from both sides and then we divide both sides by t to get this equation here. and we have negative 4 meters for the displacement minus one-half times negative 9.8 meters per second squared acceleration times 1.3 seconds and that is squared and divide by 1.3 gives us 3.293 meters per second and then we'll see that the initial velocity is this vector in blue and it has these vertical and horizontal components that we just found and we'll find the magnitude of the velocity by taking the square root of the sum of the squares of these components and I have shown how to do that on the calculator here and in writing and that gives 4.0211 meters per second and this angle Θ is the inverse tangent of the opposite over the adjacent and that's inverse tangent of 3.293 divided by 2.3077 and that gives 54.59 or 54.98, I should say, degrees above the positive x-axis. So we have 4.0 meters per second, 55 degrees above horizontal. And we know it's above the horizontal because the y-component of your velocity is positive and we chose positive to be the upward direction. In part (b), we have to find the maximum height that they reach and we can use this formula and we know that the y-component of its velocity at the maximum point is zero and we can subtract v y initial squared from both sides and that gives us this next line after we also divide by 2a. So we get the change in height equals negative v y initial squared divided by 2a so that's negative of 3.293 meters per second and square that divided by 2 times negative 9.8 meters per second and let's see what that gives us. So we have negative 3.293 squared divided by 2 divided by negative 9.8 and we get 0.5533 meters and that's not the final height that's the change in height after launch and we have to add that to the initial height of the diving board of 4 meters to get the final altitude. So plus 4 gives us 4.553, we can say that's about 4.6 meters we have two significant figures in our data 1.3 seconds for example 3.0 meters so let's have two significant figures in our answer here. Part (c) says find the final velocity when the diver hits the water. So we know the x-component of their velocity already we found that way up here and what remains to be found then is the vertical component of their velocity right before they hit the water so we'll use this formula to find it; v y is v y initial plus acceleration in the y-direction times time and that's 3.293 meters per second or what we found way up here for the initial y-component of their velocity plus negative 9.8 meters per second squared acceleration times 1.3 seconds and that gives— let's find out— 3.293 plus negative 9.8 times 1.3 negative 9.447 meters per second and then we'll plug that into here to find the final speed and that's the square root of 2.3077 squared plus negative 9.447 squared and the final speed then is 9.7248 meters per second and then we find the angle by taking this y-component of velocity 9.447 meters per second; not gonna bother putting the negative sign in there, the thing with Θ is you just need to know based on the picture what it's gonna be with respect to and in this case, we know that the velocity is gonna be downwards and it's gonna have this downward vertical component and this horizontal component and so Θ is gonna be below horizontal; we could put the negative in there and we would get a negative answer further the angle and that would be fine too but however you state it as long as you make it clear what direction this Θ is in. So we take the inverse tangent then of 9.447 divided by 2.3077 and that's 76.273 degrees. So lo and behold, we have our final answer is 9.7 meters per second directed 76 degrees below horizontal. There.

In the beginning when we solved for the Vx Initial and got 2.3077 why did we also use that in the magnitude calculation in the end? We solved for a final velocity of y, but we reused the velocity of x, could you please explain. Thanks.

Hi Icbishop, thanks for the question. Just to be clear, we're talking about part a), right? In part a) we solved for the resultant velocity, which is to say we solved for the vector sum of the x and y components. The answer for part a) is not the final velocity of y, but rather the final resultant velocity, which is normally just referred to as the velocity, but I'm including the word resultant to answer your question by explaining that the velocity is arrived at by using the pythagorean theorem to get it's magnitude by taking the square root of the sum of the squares of the x and y components of the velocity, and using trigonometry to get the direction.