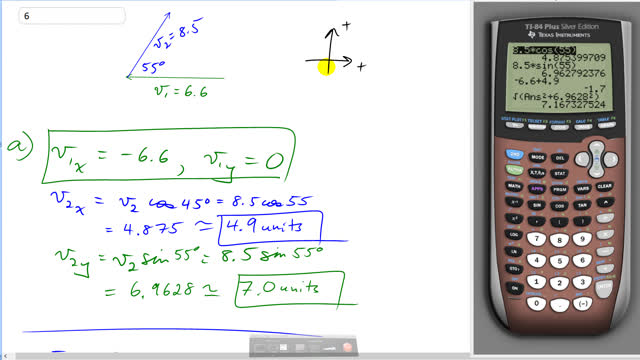 This is Giancoli Answers with Mr. Dychko. Vector 1 is easy to resolve into components because it's entirely in the x-direction. So its x-component is negative 6.6 if we take to the right being positive and up being positive here and the y-component of vector 1 is zero. Vector 2, its x-component is gonna be the length of this hypotenuse 8.5 and I'm thinking about this triangle here 8.5 divided by or sorry times cos 45 because cos 45 or 55 I should say cos 55 is the adjacent which is v 2 x divided by v 2 and so we are mulitplying both sides by v 2 here and then solving for v 2 x so v 2 x is v 2 times cos 55. So that's 8.5 times cos 55 which is about 4.9 units and that's to the right so it's positive. v 2 y is same algebra and idea but with sin now and then that gives about 7.0 units upwards. And then in part (b) find the magnitude to the resultant; well, we have to find the total x-component of the resultant and that's the x-component of the first vector plus the x-component of the second vector so that's negative 6.6 plus 4.9 which is negative 1.7 units. And then v y is the sum of the y-components and that is just that of vector 2 which is 6.9628 and then the length of the resultant vector is the square root of the sum of the squares and that gives us 7.167 units and then we'll take the inverse tangent of the y-component over the x-component of the resultant to— and so we use the resultant by the way and put that in the picture— and the resultant has this x-component here, that's v R x and then it has this y-component here, v R y component and v R x is negative 1.7 and v R y is 6.9628 and then the angle Θ which was gonna be tucked in here the inverse tangent of this opposite divided by the adjacent will give us the angle Θ. So that Θ, according to our picture, is gonna be above the negative x-axis. And so here we have it; 7.2 units, 76 degrees above the negative x-axis is our resultant.

When you are finding the angle for the resultant, why don't you use -1.7 instead of 1.7?

Hi bmalan,
Thanks for the question. What's important when using an inverse trig. function is to know how to draw the triangle so that you know how to specify the angle. What I mean is, in this solution I knew the resultant pointed up and to the left, so if I found the small angle between the resultant and the negative x-axis, then I can say "76 degrees above the negative x-axis". I can use positive component lengths to find this small angle, which is called the "reference angle". The thing with inverse trig. functions is that there are actually many answers. Your calculator gives one of them, but there are many others. For example, if you enter what you suggested, and took the inverse tangent of 6.928 / -1.7, the answer would be -76 degrees. Saying nothing else, the assumption would be that this angle is in standard position, in which case it would be 76 degrees below the positive x-axis (standard position angles are measured with respect to the positive x-axis, rotating clockwise when negative). This angle would be incorrect, even though, of course, the calculator has not made an error. The calculator just gave the smallest magnitude answer. The next answer to inverse tangent of 6.928 / -1.7 is -76 degrees minus 180 degrees (since the period of the tangent function is 180 degrees, which is to say that it has the same "y value" every 180 degrees), which is -256 degrees. This angle is correct, and it's the same as 76 degrees above the negative x-axis. Choosing between these correct answers is a matter of personal preference, and I like the look of "76 degrees above the negative x-axis".
Best wishes with your studies,
Mr. Dychko