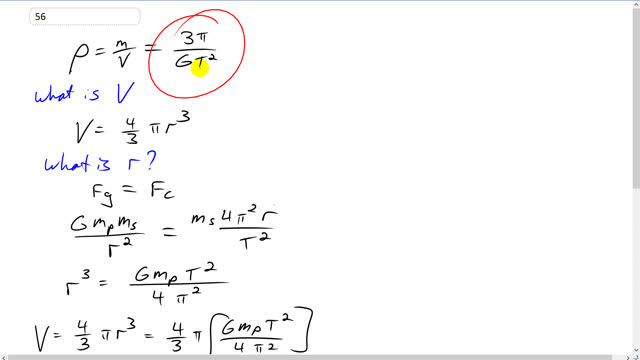 This is Giancoli Answers with Mr. Dychko. Our job is to show that density which is defined as mass per volume, mass divided by volume equals 3π divided by G and divided by T squared; the time it takes for a satellite in near-Earth orbit to do one complete revolution around the planet. So we'll start with this formula and we'll substitute a bunch of things in for V here and show that it becomes this. So, what is V? It's four-thirds πr cubed; that's the formula for the volume of the sphere. And that doesn't quite help us out enough because we don't know what r is so we can make an expression for it though in terms of period, the time it takes for the satellite to orbit. So, we can start by saying that the centripetal force of this satellite traveling around the planet is provided by gravity and we have a formula for gravity - G mass of the planet times mass of the satellite divided by its distance from the center of the planet squared which is basically the radius of the planet because we are told that it's a near-surface orbit. And that equals centripetal force. And this mv squared over r where I have used this expression for v squared over r; I think I have tried this a few times in other solutions but we can do it again. v is 2πr over period, that's what v is because that's the circumference of the of the circle that the satellite is traveling in, divided by the time it takes to do one complete revolution. So I substituted for v and then when you square that, you get 4π squared and then you get r squared but that's divided by an r here so it becomes only r and then divide by T squared and that's what I have here. So, there we have it. And then we'll solve this for r to make a substitution into here. And we have to multiply both sides by r squared; let's get rid of all that stuff, times by r squared and then you end up with r cubed over here and then divide by— mass of the satellite—4π squared and divide or multiply by T squared and then you are gonna be left with r cubed here, everything else is gonna cancel on the right side and then you will have some other things over here so divide by M s 4π squared and times by T squared as well. And we are left with the next line after we switch the sides around to put the r cube on the left. And we are not gonna take the cube root of this because we are looking for r cubed. So we make that substitution in for r cubed. We do that here. Here's a copy of the volume formula and in place of r, we are gonna write this. And this is missing a cubed or sorry, nope. I was almost gonna put a cube there but that would be bad because this is a substitution for r cubed because r cubed equals all this. So, we'll just leave that alone in the brackets. and clean it up a little bit and here's our volume formula in terms of period and mass of the planet. And that's good because when we go mass of the planet divided by volume that's the same as multiplying by the reciprocal by the way. So that's why this is the flipped version of this multiplying by the reciprocal. We are gonna have the mass of the planets cancel and we are left with 3π over universal gravitational constant times period squared. and that's the density and we have shown it to be true. And then we plug in some numbers assuming 85 minute rotational or period of revolution, I should say. We have to convert that into seconds because all of our formulas have mks units— meters, kilograms and seconds— so we multiply 85 minutes by 60 seconds per minute and this all works out to 5.4 times 10 to the 3 kilograms per cubic meter is the density of the Earth.